With the release of Dark Souls Remastered there will likely be a lot of new or returning MugenMonkey users. MugenMonkey is (unfortunately) a bit intimidating at first. So here’s a guide that will hopefully help those new players!

Additionally, I’ve recently released a mobile app for the DS1 planner as well! Download it for iOS here and Android here. I’ve also written a short blog post on that as well.

MugenMonkey allows you to create character builds for all of the Souls games. This allows you to play with your stats, weapons, armor, etc, before investing potentially dozens of hours in the game. You can then save the build to share with others, or to tweak later on. This is particularly helpful in Dark Souls 1, which has no respec mechanic.

MugenMonkey has nearly half a million Dark Souls 1 builds, so apparently people find it helpful! 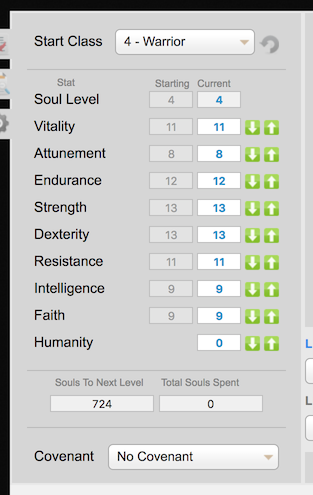 On the very left hand side of the planner you can set your starting class and choose your stats. The rest of the stats (HP, Stamina, etc) will automatically update as you level.

In the middle section you’ll find an unassuming but very useful feature: Roll Speed calculations. Many players prefer to keep their Equip Load below 25% so that they can have the fastest roll. When trying to craft the perfect build this can be tricky (especially since DS1 doesn’t surface the percentage for you). This section will tell you your current roll speed, your equp load percentage, and the amount of weight you have left before you go over the next rolling breakpoint.

You can search for and select weapons in this section. 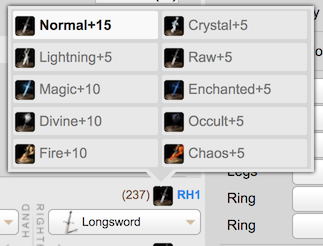 If a weapon is infusable, the Infusion Selector will automatically open. From here, you can select an infusion to compare the damage output you’ll get. (See the next section on Attack Ratings.)

After you’ve selected an Infusion, you can change it later by hitting the weapon icon.

A weapon’s attack rating (usually called AR in the community) is the amount of damage a weapon does. It’s the number in parentheses above your weapon.

If you hover above that number you’ll see a breakdown of the damage values. In order, this shows: 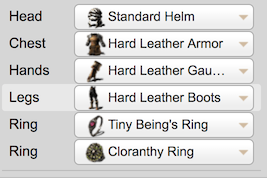 Equipping armor and rings is pretty straightfoward! Of special note is the ability to equip the Dragon Head and Dragon Body by using the icons on the right.

If you get into DS1 PVP at all at some point you’ll probably want to min max your build. You’ll want to cap your level at a certain point (e.g., 90 or 120) in order to be able to matchmake against other players. To get the most out of your stats you’ll want to choose the starting class that lets you get to your goal stats in the least number of levels possible.

To facilitate that, MugenMonkey has a super useful feature. You use it by hitting this icon in the upper left of the planner:

This menu will then slide out: 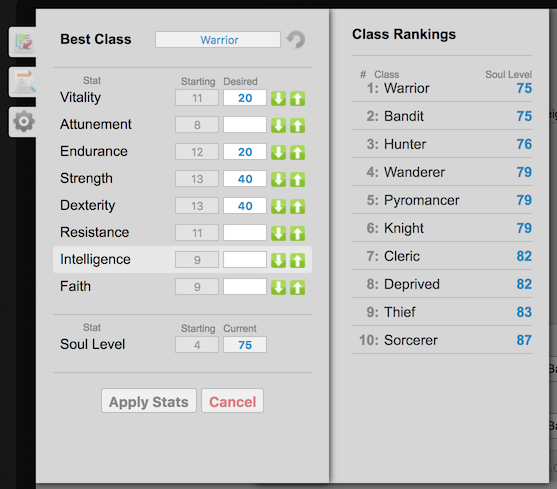 From here, enter ONLY the stats that you’re sure you want. So in this example I know that I want a build with at least 20 Vitality, 20 Endurance, 40 Strength, and 40 Dex. The planner decides that Warrior can get there in the least amount of levels (75). So if I’m creating a Level 90 build, that means I now have 15 extra levels I can put into any stat. 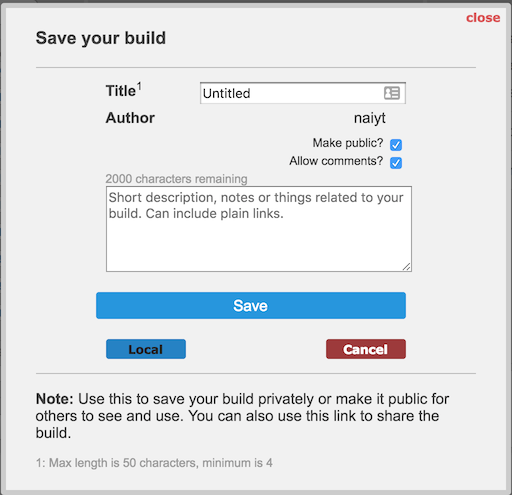 Once you’ve got a good build planned out you can hit the Save button to save your work. If you mark your build as Public it will show up on the public builds page so that others can see and use it. You don’t have to have an account to save a build, but signing up gives you some benefits:

When you browse other people’s builds you can make your own changes and tweaks to it. When you save it, it’ll save your own copy of that build! 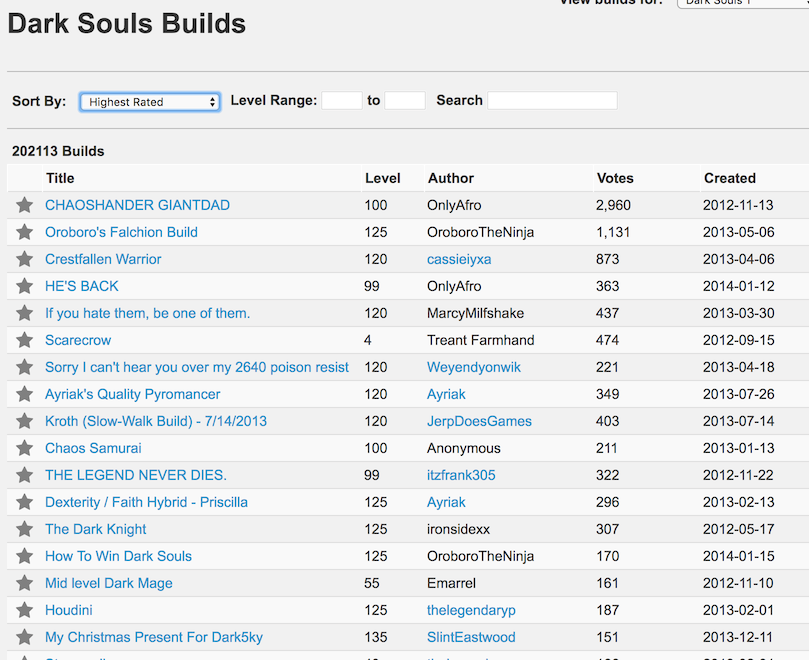 I know the site can be intimidating, but I hope this was helpful! There is actually quite a bit more you can do with MugenMonkey (not too mention the 4 other planners for all the other games in the series).